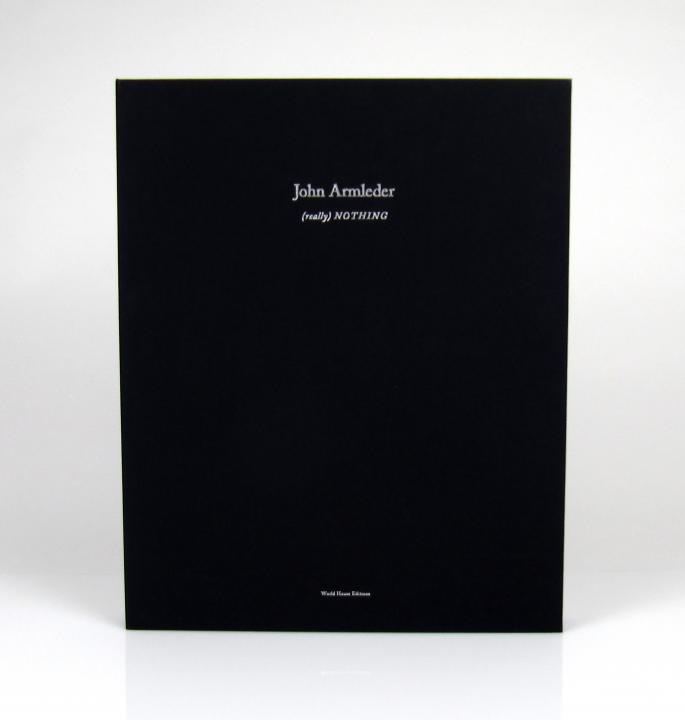 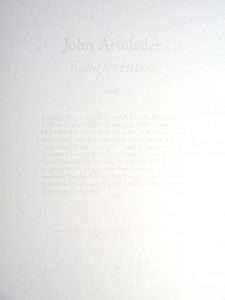 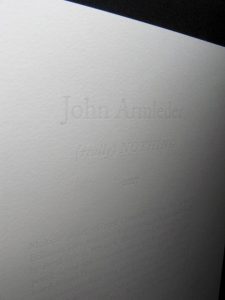 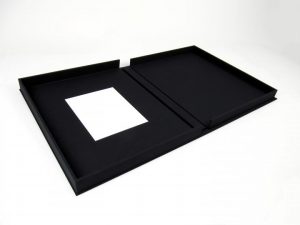 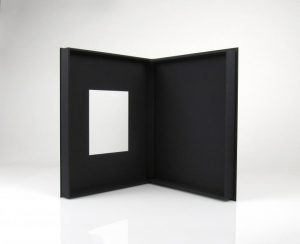 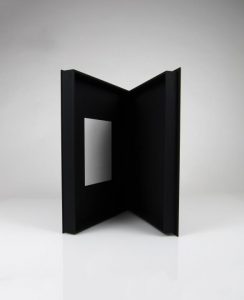 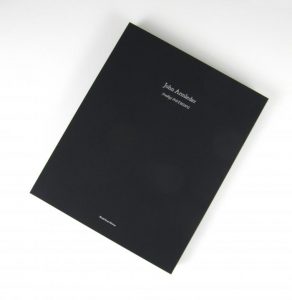 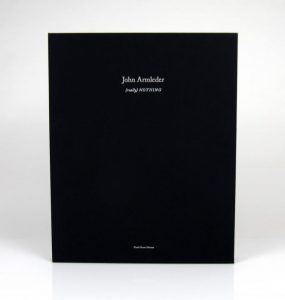 Multiple object – hand-made Lipped Clamshell portfolio box covered in black Brillianta linen with silver foil stamping, the box containing nothing, each signed and numbered in white oil pencil on the white justification sheet which has been inserted to the underside of the box lid, executed in an edition of only 20 examples (there are also 2 numbered Artist’s Proofs, 2 numbered Hors Commerce proofs and 1 annotated proof for the Cabinet d’arts graphiques, Geneva), the colophon/justification sheet hand-printed by Brad Ewing in Letterpress, inkless, on 250gsm white Somerset paper with Caslon typeface at The Grenfell Press, New York, each box fabricated by Portfoliobox, Warren, Rhode Island, the project conceived by John Armleder and published by World House Editions, Middlebury, Connecticut, in fine condition.

The origin of (really) NOTHING, as told by Donald Taglialatella:

In early June of 2016, John Armleder came to New York to prepare for his 2017 exhibitions at the David Kordansky Gallery in Los Angeles and the Almine Rech Gallery in New York.

As always during his trips to New York, John and I get together for what have become marathon lunch and tea sessions at The Mercer Hotel in SoHo, and nearly always at the same corner table.  You never know who will pass by and say hello or even stop and sit for some tea with us.  At any rate, during lunch a few days after John arrived, I asked him if he would make some gouaches/watercolors for me.  He said that it sounded like a good idea, but only if the spirit moved him.  At our next lunch a week later, I gave him a tube of ten various-sized sheets of Hahnemuhle paper.

Besides a visit to The Grenfell Press where John signed some new print editions for me, as well as several visits to the studio to show me his new paintings, John and I lunched another five times over the course of his lengthy New York trip.  During that time, I inquired only once about how the group of works on paper was coming along and was met with a smile and “as good as can be Donald.”

Our last meeting, September 1st, the day before John was to leave New York, he was already seated when I arrived and not at our usual table.  I felt something was off.  I noticed the tube I had given him back in June standing off to the side.  After ordering, John turned to me and said, “Donald, here are your unsigned monochromes!  I’m afraid the spirit just didn’t move me.”   We both laughed and John apologized for neither finding the time nor the inspiration to make the suite of works on paper for me.  Lunch went on, we eventually said our goodbyes and off I went with my “unsigned monochromes” headed back to Connecticut.

Just a few weeks later an email popped up from John.  The subject was: unsigned

How are you?…
Back in Geneva (but going tomorrow Tuesday and Wednesday to Zurich to see the Picabia show).  Will meet Andrea C also.

I thought about our great unsigned monochromes a lot.  Here are two projects to do (both, or whatever):

1/
A portfolio edition, in a nice (cloth covered ?) portfolio with several sheets inside (three ? same size or not ?).
On it, a nice lable (Typo) reading (can also be stamp foiled):

2/
A box (cardboard, linen covered ?) with enough space to contain several sheets of paper.
Edition of as many copies you feel right, but perhaps not too many.
The box bears the following label:

(the box is empty)