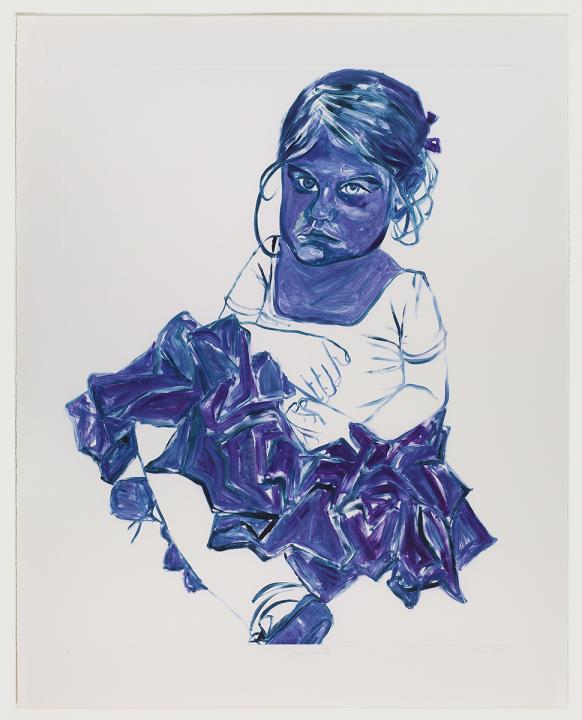 Executed on 29 and 30 September in London, the present work is unique and is from a series of 22 monotypes that make up the artists’ first significant print project.

Monotype etching drawn by hand and printed with Charbonnel etching inks from a stainless steel plate, a fine, fresh impression, the full sheet, printed on Hahnemuhle Baryta 350gsm bright white paper, signed, dated, titled and annotated “1/1” in pencil by the artist, printed by the artist with the assistance of Peter Kosowicz at Thumbprint Editions, London, published by World House Editions, Middlebury, Connecticut, in fine condition, unframed.

Prima Ballerina V plays off of the figure of the disgruntled little girl, sitting pretty much in a heap, the folds of her tu-tu out of sorts like her.  The little dancer’s strong glare isn’t so much at someone as much as it is about something.  Has she been asked to sit out of her dance class, or even worse, her recital?  The little girl’s facial expressions and body language are more in tune with a prima donna rather than a prima ballerina.  In all of the Prima Ballerina monotypes, Nicky Hoberman, through altering tone and color, creates additional layers of meaning within the same emotional state.

The new monotypes relate to the “Disguise” series of paintings that Hoberman is presently working on.  The artist has said of this series:

In these works, I’m investigating concepts of isolation, identity and individuality.  Earlier paintings portrayed girls who inhabited a world where all was dissociated; however physically close they were to each other, they remained isolated and emotionally disconnected.  This series explores the concept of disguises both as a means of hiding (or avoiding communication and relating) and an expression of dual personality.  My protagonists are hidden behind masks, face paint and veils and are camouflaged by trees, bushes and flowers. These gardens are metaphorical settings alluding to the psychic space of relationships.  Much is withheld, as the viewer only partially glimpses my protagonists, who evade real revelation, underlining a sense of dislocation and exclusion.  There is always something of a tension between wanting to be seen and blending in, and I guess this is one of the anxieties of childhood.  On a personal level I always longed for the cloak of invisibility.  Of course the inner world of the child is often a very savage place, full of terrors and sublime places too, hidden behind the mask of innocence, in that way you don’t need the disguise, childhood does it. There is something impenetrable in a young face.