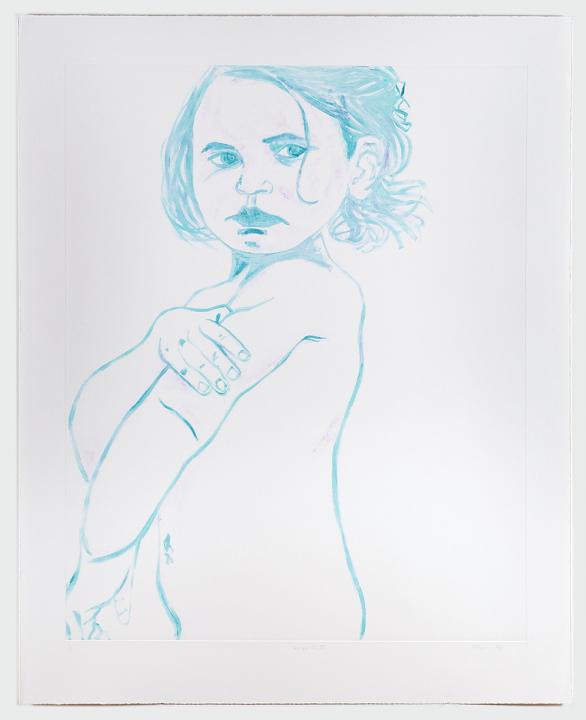 Collection of the Artist

Executed on 29 and 30 September in London, the present work is unique and is from a series of 22 monotypes that make up the artists’ first significant print project and relate to her Disguise series of paintings and drawings.

Monotype etching drawn by hand and printed with Charbonnel etching inks from a stainless steel plate, a fine, fresh impression, the full sheet, printed on Hahnemuhle Baryta 350gsm bright white paper, signed, dated, titled and annotated “1/1” in pencil by the artist, printed by the artist with the assistance of Peter Kosowicz at Thumbprint Editions, London, published by World House Editions, Middlebury, Connecticut, in fine condition, unframed

Whoopee Pie III plays off the strong stance of the knowing, looking figure.  The title is a double entrende, as the “whoopie pie” cake is a household favorite of the artists’ young daughter.   In spite of being allergic to eggs, flour and dairy, she gleans absolute pleasure from  leafing through her mother’s cook books and loves the sound of the name “whoopie pie,” literally “whooping” with delight as she chants the words over and over again like a magic incantation.   The figure in Whoopee Pie III is not necessarily the artist’s daughter, but rather the artists’ means of engendering the outward emotion of the push-pull effect of wanting and being denied through the body language and facial features of her protagonists.