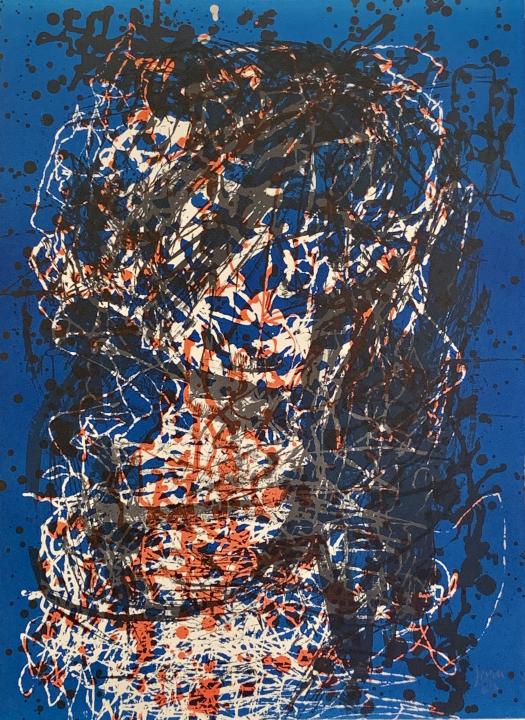 Lithograph
Edition of 50
Signed, dated and numbered in pencil

Lithograph printed in colors, from the Jubiläumsserie (Jubilee series) of 24 prints, a fine, fresh impression of the only known state, the full sheet, printed on an unidentified smooth wove paper, nearly to the edges, executed in an edition of 50 (there were no recorded proofs) printed by Permild & Rosengreen, Copenhagen, published by Galerie Birch, Copenhagen, in very fine condition, unframed.

Although Van de Loo does not note any recorded proofs for the Jubilee series, there are known trial proofs of several of the images from the portfolio.

The artist has said of this series:

Then comes the big anniversary series with 24 lithographs from the year 63. It was created at a time when I was very interested in automatism, tachism and things like that. So more or less objective coincidences. They were all created by either rolling these marble balls, which are needed to grind lithographic stones, in ink and rolling them around on the stone, and that is how the picture came about.  Or I would take long pieces of cut tape from cardboard that I had put together; I had five or six ribbons and I bent them, put them in ink, and used them to draw in parallel, or a combination of both processes. I printed one stone in negative, another in positive, so that one drawing came out light, and the other dark and a little bit I worked with the brush here and there, but very little and only on a few copies. These are experiments that are one of the few “subjective things” I’ve done.