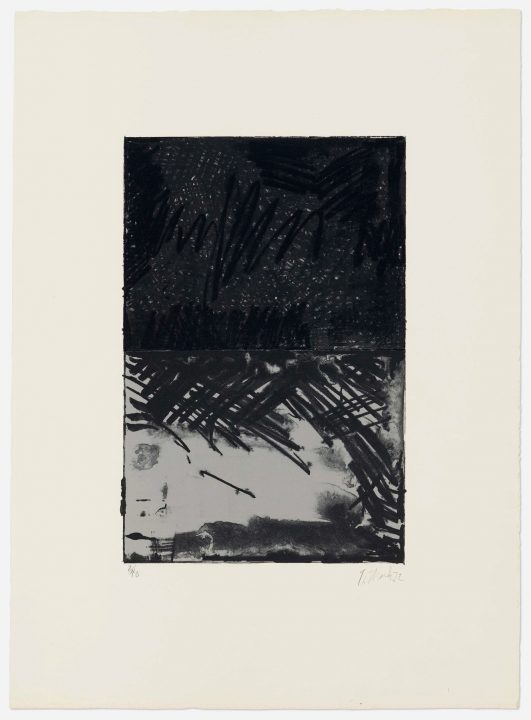 Lithograph printed in three colors, from the Untitled Press Series of six, a fine, fresh impression of the only known state, the full sheet, printed on cream white Rives paper, with margins, signed, dated and numbered in pencil by the artist, executed in an edition of 40 (there were also 3 Artist’s Proofs, 1 Progression Proof and 1 BAT), printed by Richard Wilke and Steven Hartman at Untitled Press Inc, Captiva Island, Florida, published by Untitled Press Inc, Captiva Island, Florida, in very fine condition, framed.

The Untitled Press Series prints were published by Robert Rauschenberg’s Untitled Press. Marden executed them between 13 February and 04 April 1972 at Rauschenberg’s base on Captiva Island, Florida. The series comprises four diptychs, one triptych and a singular format in which areas of flat color are contrasted with gestural strokes of the lithographic crayon.

The press was located on a property adjoining Rauschenberg’s and was made accessible by cutting a road through the subtropical vegetation with the help of resident friends. Rauschenberg’s idea was to create an atmosphere which was relaxed and away from commercial pressures.

Marden has stated that the gestural nature of the Untitled Press Series prints partly derived from the impact of the surroundings. He explained “Everyday to get tot he workshop I had to walk from the house through this jungle. These (prints) have much more of a jungle feeling. This is much more vegetal than other prints.” However, although these images are much freer than anything Marden had previously produced, such a gestural approach was not confined to prints.  The prints very much related to the underpainting on Marden’s canvases where paint was applied with strokes of the brush before being smoothed over with a spatula. However, unlike in the paintings from this period were actual depth is created by the layering of paint, in the Untitled Press Series prints, Marden creates an illusion of space by the juxtaposition of colors and marks. Of all of Marden’s prints, these have the greatest sense of depth.