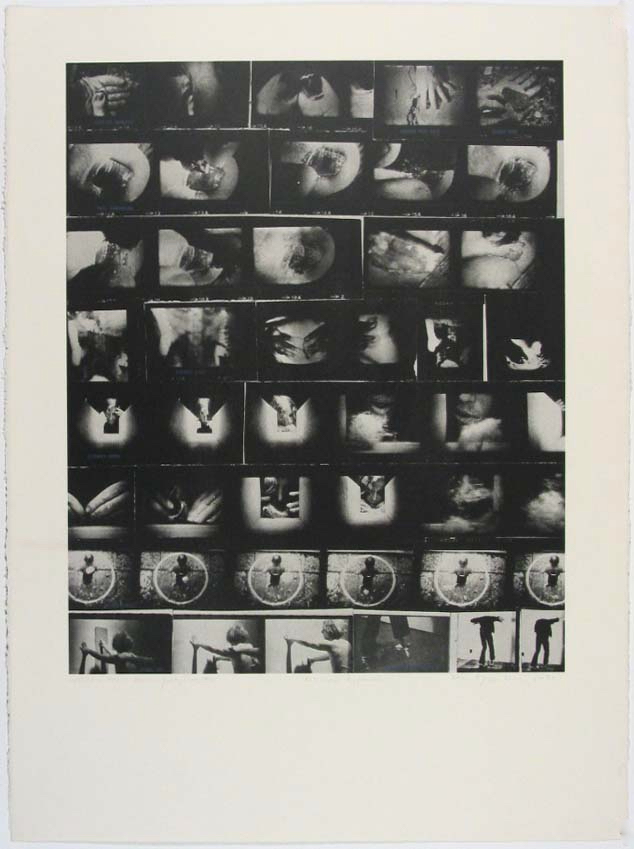 Stills from Aspen Projects I

Executed in June of 1971, the present work is the earliest print edition by the artist.

Lithograph printed in two colors from stone, a fine, fresh impression of the only known state, the full sheet, printed on Arches paper, signed, dated, numbered and titled in pencil by the artist, executed in edition of 50 (there were also 5 numbered Artist’s Proofs and one annotated NSCAD proof) printed by Robert Rogers in collaboration with Wallace Brannen at the Nova Scotia School of Art and Design Lithography Workshop, with Rogers’ blindstamp, published by the Nova Scotia College of Art and Design, Halifax; in very fine condition, unframed.

Ottawa, National Gallery of Canada, Recent Acquisitions: Prints and Drawings, Lithographs from the Nova Scotia College of Art and Design, 08 – 28 February 1972 (another example).

According to Eric Cameron:

“Dennis Oppenheim produced three prints through the Lithography Workshop, all using photographs from his performances.  The first two, Stills from Aspen Projects I and Stills from Aspen Projects II, consist of assemblages from 35 mm negatives, sprocket holes, trade markings, frame numbers and all.  The content of the works become the multiple layering of transference that distances the print from the events it purports to record; from paper to plate to photographic positive to photographic negative to video monitor (from which some of the shots are taken) to the altered time and place of the artist’s original performance, and all made more alien by their intermediate transposition through chemical and electronic states, unshown and unshowable.  That some of the performances at the end of this system of layering also hinge on the process of transference (a splinter of wood inserted into the artist’s hand; his fingernail torn off between the floor boards) might well pass unnoticed.  If the criticism of the use of photographs as a basis for prints is that the effect is, thereby, further removed from the cause, a shift of orientation can make remoteness aesthetically significant.”