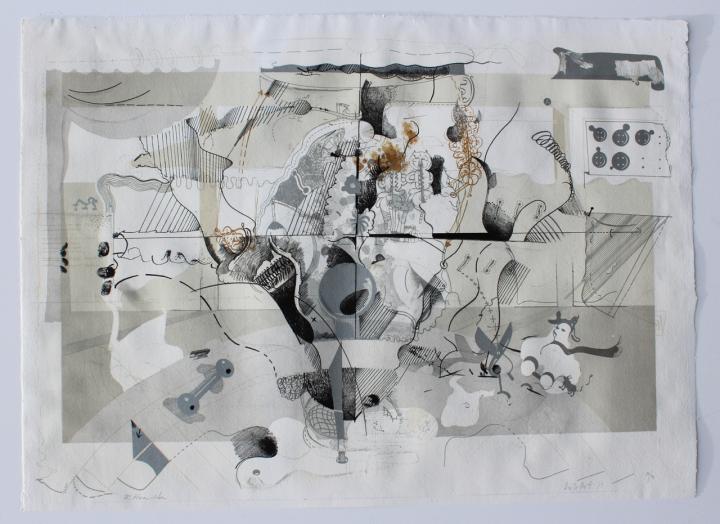 Seminar (in collaboration with Richard Hamilton)

Executed in 1971, the present work is a collaboration between Dieter Roth and the British Pop Artist Richard Hamilton (1922-2011).

A collaborative work – offset lithograph printed in nine colors from nine plates (5 plates by Dieter Roth, 4 plates by Richard Hamilton), a fine, fresh impression of the only known state (there are stage proofs but they were not editioned), the full sheet, printed on white hand-made watermarked paper (PP, RH watermark), hand-signed and dated in pencil by Dieter Roth, hand-signed in pencil by Richard Hamilton, also numbered in pencil, executed in an edition of 96 (there were also 15 Artist’s Proofs), printed by Cook Hammond & Kell, London, published by Petersburg Press, London, the sheet with slight rippling, otherwise in fine condition, unframed.

Dieter Roth first met Richard Hamilton (British, 1922-2011) in New York in 1964.  Roth was interested in collaboration and had worked with Arnulf Rainer, Stefan Wewerka and others on joint projects, however it was not until 1971 when they directly collaborated to produce the present work, the first of many true collaborations.

“The title (Seminar) refers to the exchange of ideas between the two during the making of this work.  First Roth made a plate, then Hamilton responded with a print layer of his own and so on until they had reached their ninth plate.  It is likely that Roth contributed most of the linear elements and Hamilton decided to fill in with the tonal areas, so it is harder to detect his involvement than it is to identify Roth’s distinctive imagery.  There was no preliminary planning or discussion about the image that might emerge.  The empirical nature of the processof the artists adding in turn, layer by layer, was not unlike the prodecure adopted for a series of posters they made for the Collaborations exhibitions”.

Hamilton wrote in 1986 “Collaboration with Dieter (Roth) is a competitive experience which I find as wearing as it is rewarding; in a battle for assertion of ego Dieter will win every time.  My strategy has been to run as fast as I can to keep up with his explosive invention and then create some space in which to apply some quiet interventions.”
An example from this edition is in the collection of the Indianapolis Museum of Art.