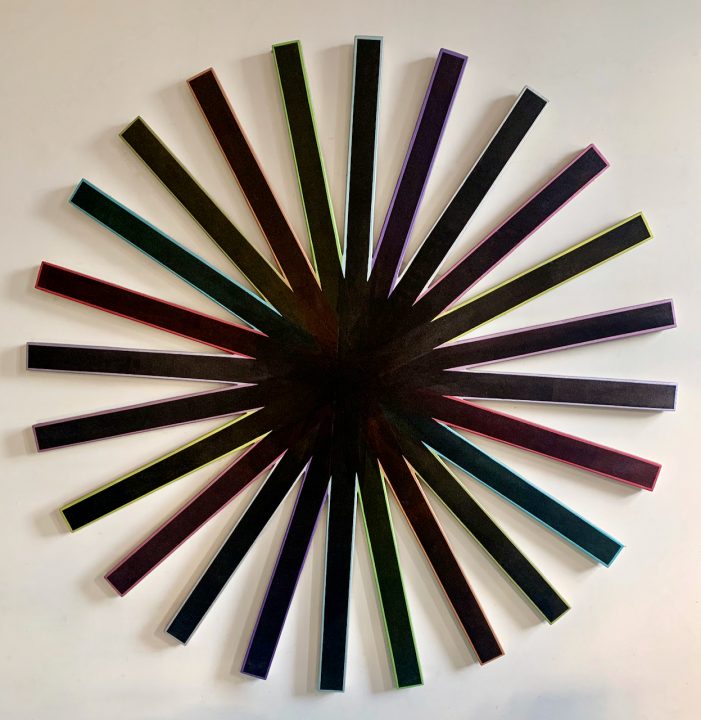 Private Collection, New York (from the above)

By descent to the present

John Tremblay is an artist intensely concerned with the notion of space, shape and forms. Although the Op Art movement of the 1960s and 70s is a visible reference of Tremblay’s, the artist is also interested in bringing the history of modern abstraction into dialogue with more recent developments in contemporary culture. His paintings, while firmly inscribed in the Pop Art/Op Art tradition, also often allude to graphic design (recalling advertising logos), as well as to urban planning, film and other aspects of contemporary consumer culture. This hybridization of the high and the low, of art and non-art often comes through in Tremblay’s titles: Coca-Cola Sunrise, Rock Crystal Antlers, Drop City.  Taken as a whole, his works contribute to a redefinition of abstract painting in contemporary terms.

In the present work, the artist has created one of his signature shaped canvases. This is an incredibly seductive painting, and what at first glance appears almost as spokes on an invisible wheel, eventually through the help of the title, leads the viewer in another visual and conceptual direction. Black Sun is anything but black, with its rays (spokes) carefully outlined in various shades of red, blue, violet, yellow, green and orange which radiate outward like the (black) rays of a sun from its seemingly dark nucleus. At first glance, Tremblay appears to have skillfully isolated the areas of color activity. This is hardly the case, as the artist has subtly and intentionally incorporated the edge colors throughout each ray of the painting, down into the center of the composition crossing through again to the opposite ray. All of the colors in Black Sun fuse at the center of the painting, creating an amazingly layered composition with a tremendous amount of depth within the black field that seems to subtly pulsate. At the same time the artist has created a delicate optical experience by means of the illusion between the positive space of the colors and the negative space of the wall. This is hardly a static painting, as Black Sun is alive with a dynamic dialogue between the viewer’s perception of what is a painting and the reality of the space it occupies. The present work is not only a painting, but it is an object. Questions of interpretation and meaning present themselves throughout Tremblay’s work. Are abstraction and non-representation always distinguishable from each other? And are these always distinguishable from representation? The push-pull is delightful.

John Tremblay’s shaped works, can be seen as a reaction against the traditional rectangle in painting. Why is the rectangle so prevalent?” the artist has asked. Tremblay’s skepticism towards conventional forms characterizes his work, and appears to be the result of an ongoing process of adjustment:

“I would make an attempt at the shape and then step back to see if it was good, if it wasn’t, I’d try again.  These are actually corrections….”

In his paintings, Tremblay never quotes from forms drawn directly from the tradition of abstraction. What he borrows in an oblique and discreet way, are essentially elements stemming from specific reinterpretations of abstraction, like the derivative forms of Op Art or even Pop Art. As a result, he reintroduces forms which had been evicted from art in the form of “by-products” or “derivatives”.

Like his 20th century avant-garde predecessors, Tremblay thus practices a kind of “abstract realism”, but the “reality” of this realism is itself synthetic, or even artificial. For its historical antecedents, the reality in question was understood as what ought to happen – a reality that would see the future integration of art and reality.