The Feminist Responsibility Project (FRP) by New York-based artist Beverly Semmes includes drawings, video, ceramics, and illuminated glass forms that are suspended throughout the gallery. At the heart of the exhibition is a collection of works on paper that features rough gestural applications of ink and paint that conceal and reveal the body as depicted in pornographic magazines. As Semmes explains, “Picture a committee of rogue censors responding to the imagery of porn. They blot out the literal; what is left behind and altered now speaks in a different voice.” The installation will include several new drawings and a recent series of deep red, floor-standing ceramic sculptures that join with the glass works to form an organic, otherworldly scene. 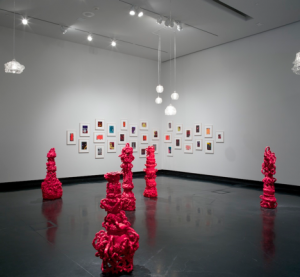