Lefebvre et Fils Gallery announces an exhibition of the work of Beverly Semmes, in collaboration with Susan Inglett Gallery, New York. This exhibition, titled “Handle”, is the artist’s first solo presentation in a Paris gallery since 1994. *

Since the late 1980s when she completed her studies, Beverly Semmes has devoted her practice to a highly tactile sculpture, working primarily in fabric and clay. She has consistently explored new materials, including glass, video and painting and has frequently mixed diverse techniques and referenced influences seen as contradictory such as expressionism, minimalism, and surrealism, managing to transmit a polysemous discourse at once biting and satiric.

Ceramics are one of the constants in her work and are often integrated into her internationally recognized large-scale fabric installations she began making in the 1990s. **

Though her ceramics evoke brutalism, her paintings harken back to the photo collages and montages of dadaism and surrealism.  Since 2011 she has been developing the Feminist Responsibility Project or FRP. *** In its physical form, FRP brings together many of the diverse materials that have been part of Semmes work for many years.

Shown this year at the Tang and Weatherspoon Art Museums and traveling to the Faulconer Gallery Grinnell College, this project consists of a series of images taken from American pornographic magazines such as Hustler and Penthouse, which the artist covers with paint and ink, concealing some of their content but amplifying their power. For the first time in France, Lefebvre et Fils gallery will present a selection of works from this series, a body of work which makes viewer, voyeur. These images resemble new subversive icons, in a society that craves ever more easily accessible images and objects, as these women become the symbol of that mass consumption from which sexuality cannot escape.

Confronting these images stands a sculptural gown, outsized and spreading its train on the floor.  Who is it for? Who is supposed to wear it? A sculpture set on the gown is the finishing touch on the installation. An offering to some mother goddess or overseeing matriarchal figure, it stares directly at the magazine page women who for their part remain naked under their layer of paint.

Rounding out the exhibition, ceramic and crystal sculptures confront visitors with their roughness and crude finish. A handprint is visible. There are a number of places for taking hold. These sculptures are made to be touched, to be picked up.

The dress-making, marks on clay, transformation of images . . . With “Handle” Beverly Semmes becomes a sort of Dr. Frankenstein, metamorphosing and totemizing the female image, at once mother and object of desire and fetishism.

Does “handle,” suggest simply holding onto something? Grasping? Grasping an object, yes, but also manipulating minds—and finally, taking possession of a body.

*In 1994 Semmes exhibited her artwork at Galerie Ghislaine Hussenot in Paris. That same year she took part in Marcia Tucker’s now famous Bad Girls group exhibition with two of her large scale fabric installations titled “Haze” and ”Yellow Pool”. This show at the New Museum of New York, which toured later that year to Los Angeles (at the UCLA Art Museum) under the title Bad Girls West, drew controversy at the time because of is provocative title and content, which some thought childish and violent. The exhibition sought to define a next wave of feminist art making.

**In 2001 Semmes received an award from the Art Critics International Association for her exhibition “Watching Her Feat” at the Fabric Workshop and Museum in Philadelphia.

***Exhibited for the first time at the Rowan University Art Gallery in Glassboro, N.J, the Feminist Responsibility Project has expanded and toured to numerous venues, before being shown this year at the Weatherspoon Art Museum. (Beverly Semmes: FRP, Weatherspoon Art Museum, The Bob & Lisa Shelley McDowell Gallery, University of North Carolina at Greensboro, May 24 – September 6, 2015) 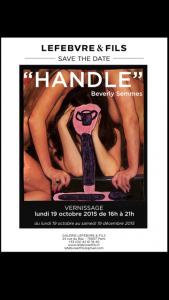