John Armleder in “The Other Side” at Museum Moderner Kunst Kärnten

The Other Side – mirrors and reflections in contemporary art

The exhibition highlights various current aesthetic and symbolic aspects of the reflecting surface. From ancient times right up to the present day, it has been symbolically significant throughout the history of art and culture.

In the ancient cultures, the mirror represents the image of the soul, offering truth and (self-) knowledge. In mediaeval European art it stands for chastity and sagacity, as well as for vanity and lust. The mystics regarded it as a sign of revelation, the Baroque as a symbol of transience. It is seen as a medium of self-perception, as a tool for egocentric self-duplication, and as a cultic object for occult evocation of paranormal powers. Its metaphorical meanings are diverse and contradictory. In contemporary art, there are many reasons for the popularity of the mirror. In an increasingly secular age, it brings into play the levels of transcendence and magic, also emphasising the aspect of narcissistic self-aggrandisement that has become a guiding social principle within the media culture of casting shows, model contests and talk shows.  In the 20th century, the mirror became emancipated from an object of representation to actual material or even the subject itself. It is both vehicle and focus of philosophical and psychological study. The exhibition consists of objects and sculptures, installations, photographs, videos and films by artists including: 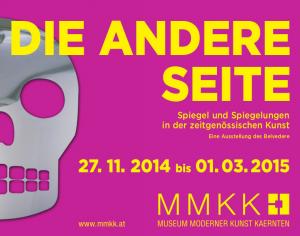