Donald Taglialatella is pleased to announce that his World House Editions imprint will participate for its second time in as many years in the 22nd edition of the Minneapolis Print & Drawing Fair, hosted by the Department of Prints and Drawings of the Minneapolis Institute of Art.  This select fair is limited to only 12 dealers from around the United States, hand-picked by the curatorial staff of the MIA.  The fair will take place at the Minneapolis Institute of Art, 2400 Third Avenue South in Minneapolis and will be located in the Reception Hall, Target Wing, Third Floor area of the museum.  It will open on Friday, 02 October 2015 from 5:30 – 9 pm with a benefit preview and reception and will run through Sunday, 04 October 2015.  Hours on Saturday and Sunday are 11 am to 5 pm.

On exhibit will be a selection of recent as well as earlier editions including works by: Rita Ackermann(Hungarian/American, b.1968), Brian Alfred (American, b.1974), Caetano de Almeida (Brazilian, b.1964), Darren Almond (British, b.1971), John Armleder (Swiss, b.1948), Robert Cottingham (American, b.1935), Mark Francis (Irish, b.1960), Antony Gormley (British, b.1950), Beverly Semmes (American, b.1958), Mitchell Squire (American, b.1958), John Tremblay (American, b.1966) and Bernar Venet (French, b.1941) and represent various printmaking techniques such as silkscreen, lithography, monotype, etching, polymer-gravure, digital output printing and chromogenic C-print.

All of the prints on exhibit have been published by World House Editions. 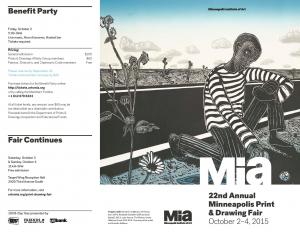