Scratched into the lithographic stone, the words of a children’s game—”HEAVY HEAVY HANGS OVER THY HEAD”—prophesies doom as a mouse gnaws a cord attached to a rifle suspended from a nail over a sleeping baby. Rockwell Kent created this print in 1946, but in our present age of Columbine, Sandy Hook, and heartbreakingly far too many other gun massacres to name, this shocking image speaks to us forcefully. Donated to the Art Center by Print Club in 2002, this extraordinary print gives its name to this exhibition.

It may be a truism that television, movies, videos, digital games, the Internet, and now, cell phones, inure viewers to gun violence. Blurring the lines between reality and fantasy, these modern media disseminate images of aggressive behavior. Whether inadvertently or intentionally, these media provide violent role models and offer perpetrators notoriety. But before the 20th century, prints were mass media. Long before the advent of television, film, and the Internet, artists depicted guns, shooting, and shooters in print.

Amy N. Worthen, curator of prints and drawings, organized the exhibition. Support is provided by the Art Center Print Club. 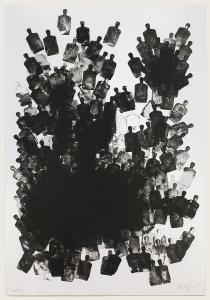