Donald Taglialatella is pleased to announce that his World House Editions imprint will participate for its fourth time in as many years at the 2016 edition of The Print Fair, sponsored by the International Fine Print Dealers Association.  Unique among the world’s major art fairs for its focus on fine prints and editions from all periods, exhibiting dealers at The Print Fair are all members of the International Fine Print Dealers Association.  The fair will take place at the Park Avenue Armory between 66th and 67th Streets in New York City and will open on Wednesday, 02 November from 6:30 to 9pm and will run through Sunday, 06 November.  Hours can be found at www.ifpda.org/content/print-fair.  The World House Editions stand is number 424.

On exhibit will be ten new projects from five artists as well as five earlier projects, all published by World House Editions.  Of those ten new projects, two of the artists will be exhibiting at The Print Fair for their first time.  Additionally during the course of the fair, Donald Taglialatella will host a happening with artist Brian Alfred and a book signing with Alix Lambert, an event to coincide with her new print editions.

Making her Print Fair debut, Liza Lou (American, b.1969) will be represented by Woven (2016), produced in collaboration with Tamarind Master Printer Deborah Chaney at the Center for Contemporary Printmaking in Norwalk, Connecticut. Woven is a lithograph in an edition of only 28 examples and is just the third print edition by the artist.  For Woven, the artist commissioned a cloth to be woven out of silver beads in Durban, South Africa. Once the cloth was in her Los Angeles studio, the artist laid a sheet of heavy Mylar over the weaving and then traced over every bead using a needle-thin drafting pen.  She has said of the process, “In tracing the weaving, I circled the perfection and imperfection of every anonymous stitch. The incongruity and the wobble of my hand became part of it, too, holding hands across the miles.”  This is the first project and first collaboration between Liza Lou and World House Editions. The artist has exhibited her work in museums and galleries internationally and she is the recipient of a MacArthur Fellowship. She will open a solo show at Lehmann Maupin, Hong Kong in January 2017.

Geneva-based multi-media artist John Armleder (Swiss, b.1948) will be represented by three new editions; two printed by Brad Ewing at The Grenfell Press in New York and the third printed by John Armleder with the assistance of Brad Ewing at The Grenfell Press.  All three of the new prints hail from the artists’ “dot” series.  Two of the works, Divisions and End of line (both 2016) are silkscreens and measure 40 inches square in editions of 48.  The third, Baronial (2016), a 9 ½ inch square work, is a hand-printed rubber stamp print executed in a variant edition of 60 unique examples.  John Armleder has been using the dot motif since the late 1970s and they can be found in the artist’s paintings, drawings, prints and even multiple objects.  Clearly paying homage to such avant-garde artists as Francis Picabia, Alexander Rodchenko, Larry Poons and even Tom Downing, John Armleder, through his notion of appropriation, has raised the simple, optical concept and arrangement of dots from a pure mode of abstract pictorial composition to a systematic concept of representation and perhaps even structural analysis.  These prints represent the 11th individual print edition and sixth collaboration between John Armleder and World House Editions dating back to 2002.  The artist’s work was recently included in the group shows GVA ← → JFK and Récit d’un temps court/Tale of a Short Time Span, both at the Musée d’art moderne et contemporain in Geneva.  His work is presently in Collectionneurs at the Kunstmuseum Luzern (thru 27 November), The Language of Things at the 21er Haus – Museum of Contemporary Art, Vienna (thru 22 January 2017) and he has forthcoming solo gallery shows with David Kordansky Gallery in Los Angeles and Almine Rech’s new New York gallery, both in January 2017.

Also on view will be two new mixed technique prints by renowned French sculptor Bernar Venet (b.1941) both executed in London at Thumbprint Studios with the assistance of Peter Kosowicz.  The first work is from a group of three new prints from the artists’ Gribs series, marking the first time the Gribs have been translated into the print medium.  These new prints are highly representative of the artist’s torch-cut steel sculptures that seem to float off the wall.  Grib is French slang for gribouillage and refers to a doodle or scribble, the kind school children did in their notebooks, often daydreaming in class.   The new prints, with their intense black lines against the white ground, seem to float off of the sheet, creating a push-pull between positive and negative space.  The second new edition, also one from a group of three new prints, is a classic Indeterminate Line work, highly representative of the artists’ drawings and sculpture.  The Indeterminate Line prints display tremendous gravitas and are juxtapositions in beauty based on balance, the strength of the material and changes in spatial perception.  Both prints on exhibit were executed utilizing the techniques of etching, polymer gravure, carborundum and photogravure with wiping.  These projects represent the fourth and fifth collaborations and all in total the fourteenth individual print edition between Bernar Venet and World House Editions.   The artist presently has a solo show, Bernar Venet: Les origines 1961-1966, at L’Espace de l’art concret, Mouans-Sartoux, France (12 June – 13 November) and his work is currently in Arte alle Corti, Palazzo Cisterna, Turin, Italy (27 May – 10 November 2016) and Focus on Sculpture in the Würth Collection, Würth Haus Rorschach, Rorschach, Switzerland (28 May 2016 – 21 May 2017).  Bernar Venet was honored earlier this year by the International Sculpture Center (ISC) with their 2016 Lifetime Achievement Award.

The final new World House Editions collaboration is with New York-based independent filmmaker, writer, photographer and performance artist, Alix Lambert (American, b.1968).   Her three Courtroom Printsmark her first time working with a print publisher and her first time exhibiting at The Print Fair.  These hand-colored lithographs, in editions of only 20, were printed in collaboration with Tamarind Master Printer Deborah Chaney at the Center for Contemporary Printmaking in Norwalk, Connecticut and Chaney’s own print shop in Brooklyn.  Having a lengthy interest in criminology, the artist sat in on a criminal court case, and, acting as her own courtroom artist and stenographer, captured moments in the lives of people who have unknowingly become subjects in her work.  Alix Lambert has said of this new series “Cameras continue to be banned from courtrooms, making them places where the practice and tradition of drawing still exists for a utilitarian purpose. Courtrooms are open to the public. My interest in drawing, my interest in storytelling, and my interest in our criminal justice system all converge in the courtroom when I sit, sketch and listen as people talk about their lives and their circumstances. I learn a lot about people and about the city I happen to be in. These three drawings were made during an attempted murder case heard in August, 2016, at the Supreme Court of The State of New York (criminal), 320 Jay St. Brooklyn, NY.”  This is the first project and first collaboration between Alix Lambert and World House Editions.  Her work was recently included in GVA ← → JFK at the Musée d’art moderne et contemporain in Geneva and in Sous Réserves at the Musée des beaux-arts de La Chaux-de-Fonds, Le Chaux-de-Fonds, Swizterland.  In addition, the artist presently has two films in production: Goodbye, Fat Larry, a documentary about celebrated commercial director and Playboy photographer, Jon Pownall, who was murdered in 1973; and Edge of Daybreak, a short film about the re-release of an album that was recorded in prison in 1979, and the men who made it.  Finally, the artist has two books forthcoming: Where Does it Hurt?, a collection of interviews about the various crisis people face today; and Fat Larry, the book tells the same non-fiction story as the movie of Jon Pownall however from a different perspective and following different threads.

To coincide with the release of Alix Lambert’s new prints, Donald Taglialatella will host a book signing with the artist on Thursday, 03 November from 2 to 5pm at his World House Editions stand.  Alix Lambert will be on hand to sign copies of a deluxe limited edition of her book, The Silencing (2008, Perceval Press).  Only 20 numbered copies of these books will be offered for sale and contain an original “Courtroom” drawing by the artist.

Additionally, on Friday, 04 November, from 2 to 4pm, Donald Taglialatella will host a happening at his World House Editions stand with American painter/printmaker and video animation artist Brian Alfred(b.1974) who will be on hand and to give out and apply a limited edition temporary tattoo.  This project is the first in a future series of temporary tattoo projects that World House Editions will be collaborating on with artists.  Brian Alfred’s work and tattoo were specially created by the artist and published by World House Editions in an edition of 300.  There is no charge for this temporary tattoo and the limit is two per person.  This is the third project and third collaboration between Brian Alfred and World House Editions dating back to 2008.  The artist recently completed a very successful solo show at Ameringer McEnery Yohe gallery in New York (26 May – 01 July 1) and was also in Aki Inomata, Kentaro Kobuke, Brian Alfred /Tokyo-London-New York at the Maho Kubota Gallery in Tokyo (01 September – 08 October).  A new book on the artist, In Praise of Shadows (2016, Yundler Brondino Verlag) was recently released.

Finally, on Saturday, 05 November, at 2pm, Donald Taglialatella will sit on a panel presented by the IFPDA in collaboration with the Association of Print Scholars.  The topic, Publishing The Contemporary:  The State of Printmaking Today, will be moderated by independent curator, print scholar and former curator of prints at the Milwaukee Art Museum, Sarah Kirk Hanley.   A select panel of contemporary publishers will discuss their aesthetic perspectives, current market forces, and individual approaches to bringing an artist’s print project to realization.  Designed to engage newcomers as well as knowledgeable scholars and curators, this program is free and open to the public and will take place in Board of Officers Room in the Park Avenue Armory.

For further information and images contact Donald Taglialatella at donald@worldhouseeditions.com. 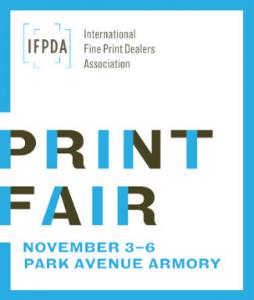