Donald Taglialatella is pleased to announce that his World House Editions imprint will release a new edition with artist ALIX LAMBERT (American, b.1968) at the opening night of the 25th Minneapolis Print & Drawing Fair, Friday, October 5t at the Minneapolis Institute of Art.  World House Editions will participate for its fifth time in as many years at the invitation-only event.  The fair continues through October 7th.  For further information please follow the link here.

The project, entitled COURTROOM (A Graphic Novel), is a limited edition Artist’s Book – a Leporello– and contains 20 original lithographs with text, limited to an edition of only 20 signed and numbered examples.  Also, each book is uniquely hand-colored in watercolor by Alix Lambert.  The work is part of Lambert’s Courtroom Prints series and is the second project and sixth edition with World House Editions, going back to 2016.

A Leporello uses a parallel folding technique whereby the pages form a continuous concertina.  Often called zig-zag or accordion binding, the present edition also has front and back linen-covered boards so that it can be handled like a normal book.  The work may be displayed in various ways.

Throughout her career, Alix Lambert has had an interest in crime and criminology.  As part of creating her Courtroom Series, the artist sits in on criminal court cases, and, acting as her own courtroom artist and stenographer, captures moments in the lives of people who have unknowingly become subjects in her work.  The artist has said of her recent project:

Visit any courtroom in the USA – they are open to the public – and you will find yourself surrounded by theater, politics, history, law, performance, drawing, and community. If you want to understand the community you live in, simply sit in a courtroom and pay attention.  For several years, I have been sitting in on criminal court cases in Brooklyn, New York, making sketches in the tradition of courtroom artists, and writing down verbatim snippets of legal exchanges and conversations during the proceedings.  I’ve observed lawyers, judges, witnesses, family members, jurors, stenographers, officers, and defendants as they all pass through the courtroom.  My drawings have captured the range of experiences that can be found in any court: from people facing life-changing decisions to those simply going about their everyday work. The resulting images and text I have contributed for my second project with World House Editions are a portrait of the Brooklyn criminal justice system, the borough that it serves and, by extension, a portrait of America – how the system treats its citizens and how we treat each other.

Alix Lambert is a New York-based independent filmmaker, writer, photographer, performance artist and printmaker.  This fall her work will be included in Record Keepers at the Duke Hall Gallery of Fine Art, James Madison University. Her work was recently included in GVA ←→JFK at the Musée d’art moderne et contemporain in Geneva and in Sous Réserves at the Musée des beaux-arts de La Chaux-de-Fonds, Le Chaux-de-Fonds, Swizterland.  Over the years her work has been shown internationally at such venues as at The Venice Biennale, The Museum of Modern Art, The Georges Pompidou Center, and the Kwangju Biennnale, to name a few.  In addition, the artist presently has two films in production: Goodbye, Fat Larry, a documentary about celebrated commercial director and Playboy photographer, Jon Pownall, who was murdered in 1973; and Edge of Daybreak, a short film about the re-release of an album that was recorded in prison in 1979, and the men who made it.  Finally, the artist has two books forthcoming: Where Does it Hurt?, a collection of interviews about the various crisis people face today; and Fat Larry, which tells the same non-fiction story as the movie of Jon Pownall however from a different perspective and following different threads.  Lambert’s feature length documentary The Mark of Cainwas nominated for an Independent Spirit Award, received an honorable mention from the French Association of Journalism, and aired on Nightline. 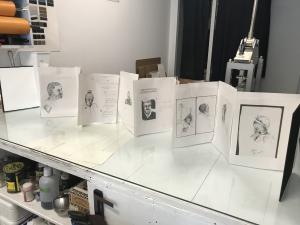